It’s taken a while to get around to writing about Ghost of Tsushima mainly because I’ve been so busy playing it. After the emotional stress and turmoil of The Last of Us Part 2, Tsushima is just such a beautiful place to spend a few hours feeling like a massively overpowered samurai.

As Jin, you serve your uncle the ruler of Tsushima as a samurai. When the Mongols invade and decimate your armies, you are thrown into an island spanning conflict that is perfect for an open-world based game. Areas are under enemy control and need to be freed so anyone that enjoys having a list of objectives and slowly achieving them will feel right at home here. The storyline is standard yet surprising enough with several great set pieces that make you invested in the fighting that is taking place.

So far, this sounds like many other games, especially Sony exclusives like Horizon Zero Dawn and Days Gone. What sets Ghost apart, however, is the sheer enjoyment of every action you do in the world. It feels as good as Red Dead, simply moving from marker to marker, taking in the cherry blossoms falling around you or walking through long grass, occasionally interrupted by a side quest, random even or a traversal puzzle like a fox den or a shrine. In fact, some serious effort has gone in from the developers to make sure the world feels populated and lived in. Often you will find yourself stumbling upon a secluded spot only to find the body of a poor soul who has felt the need to commit seppuku. It never fails to reinforce the world you are inhabiting and makes you genuinely feel like Tsushima is a small island under threat.

But despite this excellent world you inhabit, the real star of the show is the combat. Sucker Punch has excelled themselves in crafting a combat system that while unrealistic to real swordsmen is exactly how I imagine being a samurai would be in my head. Duels begin with a reluctance to draw your sword followed by a lightning-fast strike that instantly eviscerates the enemy. Upgrades allow you to chain this to take out another two enemies before you even have to begin combat properly. Then when the combat starts you have four standard unlockable stances that deal with the different types of enemy, sword, spear, shield and brute, each upgradeable in their own way to allow you to cut through the Mongol hordes. Despite feeling incredibly overpowered, your desire for the perfect sword fight or clearance of a group of enemies will often lead to you making mistakes and taking some for granted. Doing this quickly leads to Jin on the ground waiting to be finished off, so you must balance your desire to kill the enemies with all the grace of a Kurosawa flick and the practicalities of actually getting the job done. This excellent combat and desire for perfection keep you hooked where other games would begin to feel repetitive, you crave more and more enemies to dare to take you on ad Jin becomes more and more powerful. At most points in the game, you can take down as many as ten enemies with simple slashes and last-minute dodges before surveying the damage you have done as Jin sheaths the katana. Enemies that are mortally wounded can be left to perish or finished off with a no-look downward thrust as you walk past. It is stylish in the extreme and anyone with a passing interest in samurai films will be hooked from early on.

It would be remiss to talk about this game without the wonderful weather effects and photo mode. As you travel further down the path of dishonour, more and more storms break out in the island meaning duels against bosses can play out against lightning strikes and driving rain, a quick flick of the right d-pad stops everything and opens up one of the best photo modes in gaming. You can add a Kurosawa filter, only have red as the colour against monochrome, decide on the weather, time of day and then add particles like leaves, rain, petals and more to come up with your own homage to samurai culture. 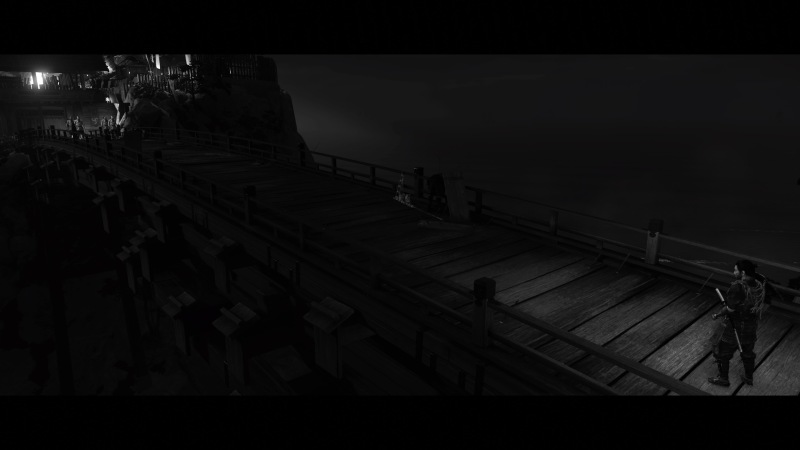 While I’ve enjoyed every minute of the game it would be unfair not to level some criticism at the few faults it has. The camera can get confused during fight scenes similarly to Dark Souls and the game is crying out for the kick move that some stances have to be more easily triggered without having to hold down the button to charge then release. It also isn’t clear how much of an area you should complete before moving onto the rest of the story missions. For completionists, this isn’t a problem but anyone else will be knocking out side-quests for hours before progressing to the second act. A clearer focus on progression whilst making it clear you can tidy up things later would be welcomed but this is a minor gripe.

In all after the emotional wringer of The Last of Us, this is a real palette cleanser, you should enjoy every minute of this but it doesn’t push any boundaries for you as a gamer. It comes with a well-realized world, brilliant combat and worthwhile exploration, just don’t be expecting anything more than an excellent video game.

My Tweets
Join 1,326 other subscribers