Probably the best card of talent ever to come to Belfast. I thought the Smackdown Roster of 2002 would never be topped. Despite this, some strange matchups stopped them taking […]

Probably the best card of talent ever to come to Belfast. I thought the Smackdown Roster of 2002 would never be topped. Despite this, some strange matchups stopped them taking full advantage. The Belfast crowd are very smart and despite not being a full house they were exceptional in respect of the matches and the superstars.

Hugo Knox beat Alexander Wolfe – Poor Match, for an opener you would have expected lots of effort from both men. Knox may look the part but his stripper gimmick and execution are poor. One dropkick was so far off the mark it hit Wolfe’s fully raised hands. Not good.

No Way Jose Beat Wesley Blake – Better atmosphere thanks to Jose and his antics. Unfortunately, Blake has no gimmick and despite playing the typical heel didn’t get to show much. Jose’s finish is weak as well but it got the crowd going after the dead first match.

Bayley and Carmella beat Nikki Storm and Peyton Royce – Good match. The smart crowd knew Nikki Storm well so there was a bit of face vs face going on. Bayley’s full entrance was a surprise and the crowd was in the palm of her hands after that. She needs to move up. Still unsure of Bayley to belly for a finisher. Carmella showed a good range of moves as did Nikki and Royce.

Bobby Roode Beat Angelo Dawkins. A pleasure to see Bobby Roode. The TNA chants were in full force as this turned into a squash match. The quality of execution was so far above the first two matches, that it made them seem worse than they probably were. Goode needs a finisher as well. Spine buster won’t cut it on the main roster.

The Revival Beat American Alpha retaining belts. Great match. American Alpha are like an early Hart Foundation. Chad Gable plays Bret and gets an almighty beating before Jason Jordan as the Anvil gets the hot tag. They still lose but steal the show. A great finish involving an exposed turnbuckle leading to a roll-up for the no-nonsense revival. Old school tag at its best. 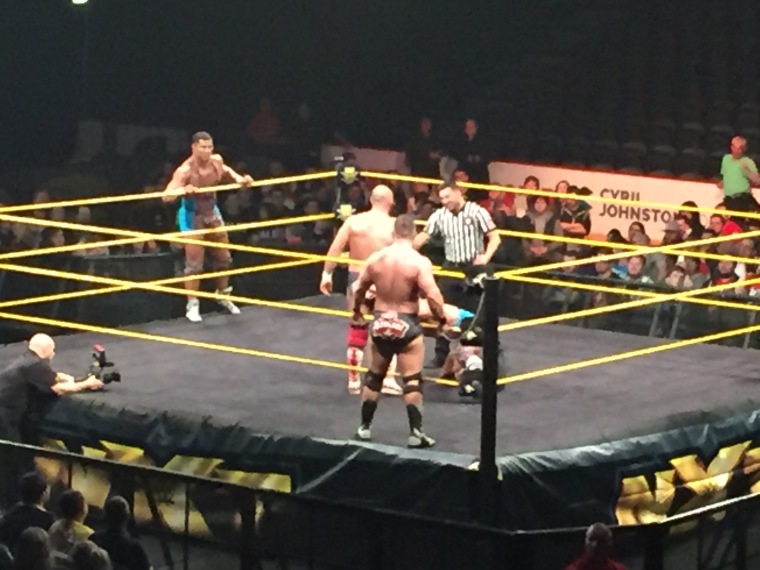 Andrade Almas Beat Tye Dillinger – Dillinger came out to an almighty ovation but then began slagging Belfast to get a heel turn. Chants of 10 turned to 1, making us think a real big face like Aries or Nakamura would come out to smash him. Strangely it was Almas who came out. Decent match but wasted opportunity. Great super kick from Dillinger wasn’t enough.

Asuka retained against Nia Jaxx and Alexa Bliss. A surprise triple threat for the belts but a very poor match. Asuka and Bliss had chemistry together but Jaxx couldn’t make it work three ways. She was out of touch and despite trying a ‘peoples’ elbow just got in the way. Bliss looked good and had a couple of curb stomp like moves. Asuka didn’t get a chance to shine and won by submitting Bliss. Very disappointing match.

Main Event Finn Balor and Shinsuke Nakamura Beat Samoa Joe and Austin Aries – I have never seen four more talented stars share a ring in my country. The crowd was electric and nearly blew the roof off for all four entrances. The match itself was tight and brutal at the same time. Aries was sporting taped up ribs but this didn’t stop Nakamura hitting them with repeated knees. The facials and speed of all four men were something to behold as they all had an equal time to shine. Joe put quite a few moves on Nakamura before Finn got the hot tag. Aries, unfortunately, was always going to be the fall guy and lost to a knee from Nakamura followed by the Coup de Gras from Balor. Bullet club symbolism was everywhere as the two milked the crowd. All four are ready for the brand split.